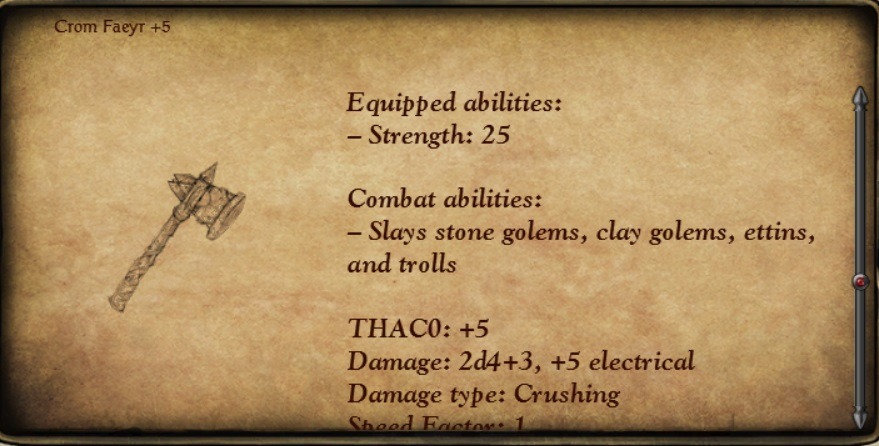 Baldur’s Gate is a fantasy role-playing video game launched in 1998. Baldur Gate’s enhanced version is launched on 2012. Baldur gate’s mobile version is also available in Google Playstore. Baldur’s Gate game includes many weapon, Crom Faeyr hammer is a one of the best weapon in Baldur’s Gate.

Crom Faeyr is a warhammer, it boosts the wielder’s strength to the maximum and instantly slays Stone Golems, Clay Golems, Ettins and Trotts on hit.

It is the true name that the dwarven weaponsmith, Silver blade gave to the weapon intented to create for his son. However, his son died before the weapon was ever completed, but here is its stand complete forged from the combined magic of the original hammer with gauntlets power of ogre power and girdle of frost giant strength. Crom Faeyr give the users to power of the original warhammer of Thunderbolts, also ability to kill the trolls, ettins additionally enormous strength and golems in one blow. Cromwell in Athkatla will combine the hammer of Thunderbolts, Gauntlets of Ogre Power, Girdle of Frost giant strength and Crom Faeyr scroll for 10000 to create the hammer. Crom Faeyr can be retained as a reward of the tier 3-2 battle.

Crom Faeyr strength boosts applies when wielding it in main or off-hand. It is the first obtainable melee weapon that is not specific to the one class and therefore can hit demons and mages protected by Improved Mantle. Crom Faeyr hammer is more than the sum of its components can be put on different characters. Something to consider before running off to Cromwell.

Crom Faeyr Warhammer weapon is most powerful, significantly boosting the wearer’s strength, strongest of these artifacts, and instantly slaying certain type of creatures it is wielded against.

Steps to Find the Crom Faeyr in “Baldur’s Gate 2”.

So, above are the steps for getting Crom Faeyr Warhammer.

Crom Faeyr is one of the strongest Warhammer weapon in the Baldur’s Gate. In this article, we explained information about Crom Faeyr and how to get it.

Best Tudor Watches for Women That Are Worth Buying

How to Fix: Quota Exceeded Error in Google Drive

FaceApp: Take A Look Into This AI Based Face Editing App [2021]

How To Download And Install HipStore on iPhone/iPad In 2020

How to Not Pay Full Price for Almost Anything