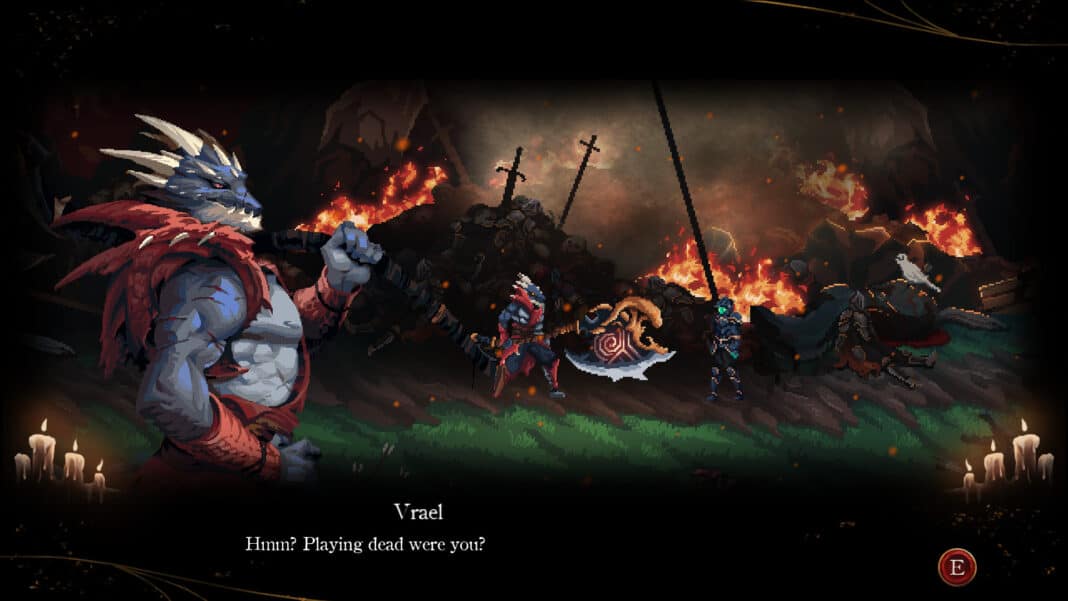 Over quarantine, we’ve all gotten an opportunity to take care of that thing that we’ve always been meaning to do but never had time for before. One of those things for me was the massive pile of random video games in my Steam library that I hadn’t ever touched before. (Like you and Grande Vegas Casino Bonuses. Check them out!)

You see, a while back, I bought a Humble Bundle, but like most people, I never played through the majority of the games in the bundle. Some are awesome, like Undertale, and others are bleh, like Stick Fight: The Game. However, I think I might have found a hidden gem among my games: Death’s Gambit.

Death’s Gambit defines itself as a 2D Souls-like, along the vein of “Hollowknight” and “Salt And Sanctuary”. If you’re unfamiliar with the genre, the name derives itself from Fromsoftware’s Soulsborne franchises, which include the esteemed titles of “Demon Souls”, “Bloodborne”, and the Dark Souls trilogy. All of their games are built around a combat system of stamina management and slick combat.

There was an internet scandal a while back where frustrated Game Journalists published op-eds about how Souls-like needed easy modes, much to the chagrin of the communities that actually played the games who thought that adding an Easy mode would defeat the point.

Regardless of where you stand on THAT issue, Souls-likes focus on combat, exploration, and love to beat the snot out of the player.

So before I can even get into the gameplay of Death’s Gambit, I need to address a pretty significant error I encountered. During my first boot up of the game, I had been playing for about half an hour when the game crashed on me.

When I tried loading up the game again, the game would throw up an error window about missing texture files and then close on itself. I couldn’t find a solution online, and the few articles discussing the problem just said to reinstall drivers, which I did, but that didn’t solve the problem.

I DID solve the problem myself, however. Luckily, I tried verifying the game cache, which fixed the problem. This is an easy process that you can do through Steam. All you have to do is open Steam, right-click on Death’s Gambit in your game list, go to properties, navigate to local files, and there is a button that will verify the game cache.

Let it run, and badda bing, badda boom, problem solved. It’s an easy fix for an obtuse problem that nearly turned me off the game completely.

So unlike most other Souls-likes, Death’s Gambit doesn’t make its story insanely complicated to follow. To understand what the heck is going on in Dark Souls, you have read item descriptions, piece together snippets of random dialogue, and consult wiki pages. More likely, though, you’ll have to watch a dozen different Lore videos on YouTube of people who actually bothered to do all that.

Death’s Gambit, on the other hand, has the gall to use gameplay segments, short cutscenes, flashbacks, and character dialogues to get across what’s going on. In fact, I think it does it really well too. These story segments are often triggered by dying X number of times when a short lull in gameplay is expected anyway. Also, it doesn’t hurt that Death himself is a character in the story.

The story follows Soren, a knight who’s made a pact with Death for reasons unclear, although it seems to have something to do with finding his missing mum. His mum buggered off to who-knows-where, and it’s up to Soren to use his wits, guile, and his buddy, the personification of Death itself, to find her. Oh, and do whatever Death wants too, I guess.

Unlike other Souls-likes, Soren has a defined personality. His interactions with other characters show him to be snarky, good-natured, and determined. He has a tendency to push Death’s buttons, and Soren’s dialogue with other characters is a treat. There’s this Lizard-man named Vrael who’s trying to be all tough and grimacing, and Soren’s just like, “Uh-huh, yeah, okay.”

Speaking of, Vrael, the NPC’s, and the rest of the game world have a tendency to pull a Robert Jordan and throws out Proper Nouns that I can’t remember for the life of me. There are immortals, an immortality source of some kind, some sort of covenant, I think, a city name with too many apostrophes, and faraway lands slash kingdoms that went in one ear and out the other. I like the world as I encounter it, but beyond what I’ve played through, I couldn’t tell you much else about it.

Without spoiling much, one of the most standout moments that I’ve gotten to at the time of writing is this specific boss I’m currently stuck on. Up until I fought this one, this entire game has been the traditional sword and board fantasy. Then this boss pulls out a literal freaking SNIPER RIFLE and headshots me.

I have no idea how that fits into the deep lore, but I love it.

Of course, like all video games, they live or die on their actual gameplay. So let’s break it down.

The nitty-gritty moment-to-moment gameplay is souls-like to the core. You gear up with swords, shields, spells, and armor and keep going right until things stop trying to kill you. You gain shards upon killing enemies, which you use to buy items and level up. During combat, you hack, slash, and dodge roll your way to victory. On top of this, you manage stamina, a skill meter, items, and weapon-specific abilities. It’s not the smoothest gameplay, but it’s far from clunky.

The largest way Death’s Gambit differs from other Souls-likes is the mechanics surrounding the main healing item. In Dark Souls, you have Estus Flasks, which refill when you rest at bonfires. Death’s Gambit has something similar in the form of feathers. Unlike Estus, you can find more feathers scattered throughout the world, that each will provide different benefits from their use. Some provide greater healing, while others will increase stamina regeneration.

However, every time you die, you leave one of the feathers on the ground until you return and collect it. This happens every time you die, so you could theoretically end up losing all your feathers if you died in a difficult area and die multiple times trying to recover what you already lost. The alternative solution is to pay a quantity of shards to recover them remotely, but the price goes up as you level up.

Now, I do not balk at gameplay challenges. I do not, however, like blatantly unfair mechanics. You see, if you’re playing through the game, and you die and drop a feather, you make the area harder next time you attempt it. And if you keep dying, it just gets even harder next time around. This mechanic is a feedback loop that works against the player and probably is part of where the “Gambit” part of the game’s title is derived.

The alternate, alternate solution is to convert your feathers into bonus damage. This can be done for free, and you don’t drop the feathers when they’re applied like this. What I ended up doing what just converting all my feathers into bonus damage and just threw myself at the bosses over and over again to learn its moveset- and at that point, I didn’t need the feathers to heal regardless.

My main problem is that this system encourages either insanely meticulous gameplay or insanely reckless gameplay. Maybe that’s what the developers want, but it’s not really what I enjoy from these games. I ended up just running past any enemy that was causing me too much trouble until I reached the next safe point.

Other than that, I’ve been enjoying my time with Death’s Gambit. The platforming has been relatively easy up to where I’ve played, which suits me fine. The various zones have been pretty linear, but they all connect to each other quite nicely, so there’s enough to explore to scratch that itch.

The broader focus on dialogue and character interactions makes finding new NPCs and bosses more memorable than they sometimes were in Hollowknight or Dark Souls. I particularly liked finding a snail that confuses Soren with one of his own kind because Soren is rotting, dead, and green. And smells.

Death’s Gambit has me quite excited to play more, which is always a good sign. It seems to be a bit clunky under the hood, but that’s to be expected from a smaller development studio. For people that are looking for the insanely difficult gameplay, this will probably satisfy them if it continues as I’ve seen it so far.

The world design isn’t as expansive as I would like, but again, smaller studio. If you’re one to prefer the lore hunting, then Death’s Gambit is going to be disappointingly transparent about its story.

Basically, let me sum it up like this: I had to fix a massive game-breaking bug that prevented me from even booting up the game, yet the game has enticed me enough to keep playing and be excited for what comes next. If that’s not an endorsement, I don’t know what is.

Alright, so between the time that I initially wrote this article and prepared to submit it, I worked in a couple more hours into Death’s Gambit– and I have a few things I’d like to add.

First of all, I encountered another game crashing error. I don’t know what triggered it, and this time I didn’t have a solution for it. I tried verifying the game files like before and updated my drivers, but neither of those solutions worked. I simply left the game open with the error on screen, walked away for a few minutes, and- I kid you not, the game spontaneously started working again. I don’t know how, I don’t know why, but I was THIS close to giving up on the game. Again.

However, I’m thrilled I got to play more, because HOLY CRAP. After Sniper Rifle Lady, this game goes absolutely insane. I have no idea what’s going on, but there’s suddenly Lovecraftian nightmares, existential threats, and some really mind-bending and unique enemy encounters. I am SO into this game, despite it’s hardest attempts to turn me off.

I won’t spoil any specifics, but it’s very clear to me that this game is a work of passion and not merely a “Dark Souls Clone”. All my previous critiques still apply, but if you can pick this game up in a bundle or during a sale like I did, my first seven-hour impression (paltry in video game terms) has really hooked me in. Get past the first couple of hours (which are great on their own), and this game takes a sharp left turn that’ll make your jaw drop.

How to Pair and Control Apple TV with Apple Watch

Tips in Choosing Your Moving Company

How to Install Kodi krypton v17.1 Ares Wizard & Get PIN By Using http://bit.ly/build_pin...