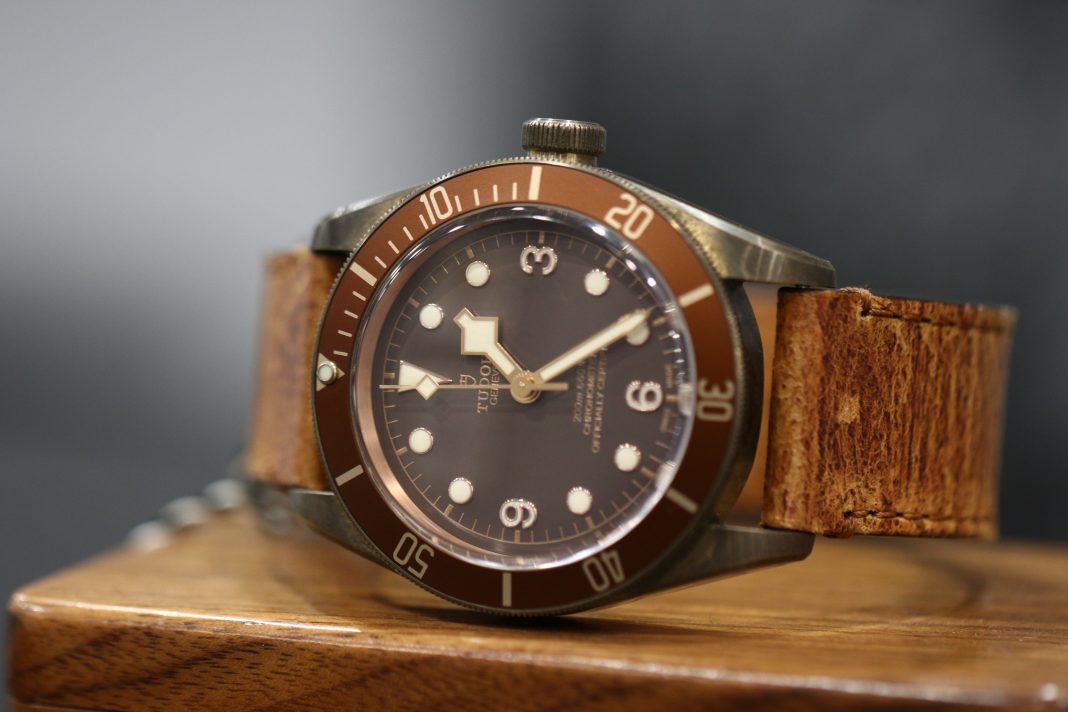 Tudor may not be as well recognized as the other luxury brands, but it comes with some serious pedigree. It’s not a secret by now, but it is actually owned by Rolex. Far from being a second-class brand, Tudor is becoming increasingly popular thanks to its fine line of watch models.

The brand’s movements are 100% Swiss-made, with parts being manufactured and assembled in various facilities around Switzerland. The finishing touches and final movement assembly takes place in Tudor’s Geneva headquarters. Tudor’s build quality, engineering prowess, and craftsmanship that goes into a Tudor watch are practically identical to that which goes into a Rolex, the only disparity being Rolex’s use of 904L stainless steel as opposed to the 316 L steel that is used by Tudor.

This company is highly respected in the world of watchmaking, even considered to be among the best. Just recently, it released its first-ever boutique exclusive watch, the Black Bay Fifty-Eight Bronze.

In 1926, The Tudor was registered as a trademark by a watch dealer called Veuve de Philippe Hüther. Hans Wilsdorf, the founder of Rolex, took over The Tudor brand in 1936 with a desire to offer his retailers an alternative, more affordable range of watches to be sold alongside his legendary Rolex timepieces.

Establishing Montres Tudor S.A. in 1946, Wilsdorf offered a new collection of Tudor watches appealing to a different market segment, but with the prestige of the Rolex name. The introduction of Tudor allowed the company to cater to economies of scale. Tudor cases were paired with third-party movements and watches were assembled within the same facilities used for their premium counterparts.

The Tudor Oyster was launched in 1947. Interestingly, the Oyster name was first seen on Rolex models, alluding to the water-resistance of the watches. The practice of sharing brand names between the two marques would also see Tudor’s “Submariner” models released in due course. Tudor invested in advertising to promote its products, with its founder’s face appearing prominently on the campaign materials accompanied by his own personal endorsement for the company’s watches.

There was a time when sales of Tudor watches seemed to have plateaued out. It stopped selling its watches in the UK and US for a few years and only returned to the UK market in 2014.

The arrival of Davide Cerrato, design director at Tudor, signaled a new era of creativity and the brand began releasing stunning watches, which captured some of the interesting details of its former timepieces and earned the admiration of watch enthusiasts once again. They never looked back since then. Over the next few years, Tudor has become a rising star, delivering a competitive package of style, Swiss watchmaking know-how, and exceptional value.

The latest in the range of Tudor watches is a new version of its bestselling Black Black Bay Fifty Eight model. It features for the first time a bronze bracelet fitted with a new clasp with a rapid adjustment system. It’s the brand’s first-ever, boutique-exclusive timepiece.

Bronze, an emblematic material in the watchmaking industry for its characteristic aging, now appears as a new color palette on the iconic timepiece. A rich bronze-brown tone decorates the dial and bezel of the divers’ watch whose naval inspiration is evident in every angle. Its availability is exclusive to Tudor Boutiques, limited to just 50 pieces, worldwide.

Fitted on a 39mm bronze case, the choice of material is an aesthetic nod to the bronzes on old ships and other deep-sea diving equipment. Its size follows the proportions of the first Tudor diver watches released in the 1950s, particularly the famous 7924 reference or Big Crown, the first Tudor watch to be water-resistant to 200 meters. It debuted in 1958, hence the name “fifty-eight”.

Tudor reintroduces the distinctive layout with applied Arabic numerals at 3, 6, and 9 o’clock, something that is exclusive to bronze editions. The dial itself is also new, the color is unprecedented and different from the tone used on the 2016 BB Bronze with a brown dial. Named brown-bronze, the color is more saturated, more pronounced, and slightly darker. Also, Tudor has adopted one of the hottest trends of the current market, the Gradient Dial which boasts a color-fading effect. The bezel is also color-matched with a brown-bronze anodized aluminum insert. Complementing the overall look are the hands, applied indexes, minute track, logo, and bezel’s 60-minute scale, all in gold-tone.

The Black Bay Fifty-Eight Bronze marks the first time that the brand has produced a bracelet entirely from bronze. It is packaged with an interchangeable brown-bronze jacquard fabric strap with a yellow stripe and bronze buckle.

Inside the case, you would find the same COSC-certified Calibre MT5400 movement used in other members of the Black Bay Fifty-Eight family. Modern and designed to be precise and reliable, it features a silicon balance spring and a traversing bridge for better resistance to shocks. This watch has a 70hrs power reserve.

The Tudor BB58 Bronze is released as part of the permanent collection, meaning it won’t be limited. However, being a boutique-exclusive edition, a first for the brand, it would only be available in official Tudor boutiques. The watch will retail for €4,250 or more or less than $5,000.

Other Tudor Watches to Consider

Are you loving the new Black Bay Fifty-Eight Bronze watch? If so, you’re sure to love these other Tudor watches as well.

First presented in 1971, the Tudor Montecarlo 7149/0 gradually replaced the 7031/0 models. The later models proved to be better in terms of performance, owing to the use of a newer movement.

This is the latest version of the Oysterdate series. However, unlike the previous models, it was not commercialized. It features a bidirectional bezel with an anodized exceptional insert.

In 1998, the Oyster bracelet was abandoned progressively. The 79260, produced in 2000, only has Tudor markings on its dial. This watch sports sapphire crystal glass and inside is a self-winding automatic movement.

Make no mistake. While Tudor may seemingly live under the shadow of its sibling, Rolex, it can stand on its own, providing high-quality watches with elegant and sturdy designs comparable to The Crown yet at a much affordable price. This company continues to prove its capability and shows no sign of slowing down. You can only expect it to carry on in giving its customers watches that would last for more than a lifetime.

The Climate Impact of NFTs and Crypto-Art

Essential Tips And Tricks Every New PC Gamer Should Know

Apex Legends Beginner’s Guide: 5 things to know before you start playing the game

Best Tudor Watches for Women That Are Worth Buying

The Climate Impact of NFTs and Crypto-Art

The most effective method to Use Sky3DS Plus to Play All 3DS Games on...

How To Change Your Player Model In GMod