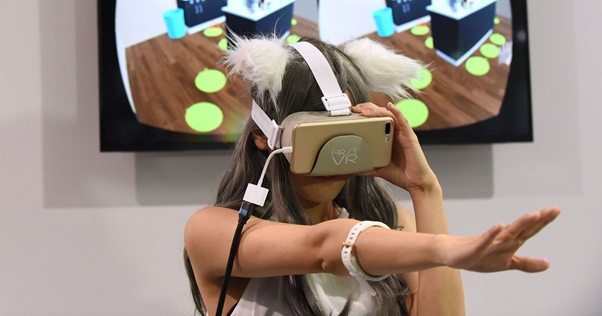 Anthropomorphic robots in Hollywood movies look less and less like the fantasy of writers. Falling in love with virtual reality or having an affair with artificial intelligence? It no longer seems absurd. How technology has changed our perception of love and where it will lead?For instance, apparently you can meet singles on Eharmony and plenty other online websites now.

For the Virtual Reality (VR) and Augmented Reality (AR) market, the release of Steven Spielberg’s “Ready Player One” was important. The film takes us back to 2045 when humanity lives in the virtual world of OASIS. The main characters meet at OASIS, where they have their first date and first dance. After all, there is no place for love in real life.

However paradoxical it may seem, there are more and more lonely people in a world full of ways to get to know each other. It is much easier to create a soulmate for yourself, just as you have always dreamed of than to find such a person in the real world or even in the virtual world.

All these fantasies make people feel weary: is it really so difficult for people to communicate with each other in the real world? All the technologies described above actually work now, though not as perfectly as in the movies. But they don’t seem as dramatic to us as they are in movies. And what if we just don’t notice that all this is already happening to us? Let’s take a look at online dating sites and functions they provide us with?

Have trouble with online dating? Click the link and figure out how to impress a girl by texting.

No wonder online dating is so popular nowadays. We are meeting and talking less and less.  Text, photo, video – you can send it anytime and get an answer right away. And if you look at the digital way of communication from the other side? When we constantly exchange messages, it seems to us that we are always together. And we can’t really remember the last time we saw each other. Messages are a short format. We perceive information through our own subjective filters – we interpret it, as we understand it, invent it where there is a lack of information, and in case there was no real meeting with a person, we create their image in our head. The less real contact with the interlocutor, the higher the probability that you detach yourself from life. It turns out that the relationship in the messenger is not a relationship. As long as you are not connected with the physical world, it is only a virtual simulation, a fascinating game of imagination. And it is better not to forget about it.

It’s convenient to take pictures of yourself. Now, social media photos don’t capture how we really look; it’s a reflection of how we want to look (or how we look in our own fantasies about ourselves). And the further we go, the more we can distort reality. This is facilitated by machine vision technology – facial recognition and augmented reality. At first, it was only possible to improve the color of the face, but now it is possible to enlarge the eyes or lips. As a result, people don’t even resemble themselves in profile pictures. Moreover, there is an abundance of catfish on dating sites that actually follow different goals but fool other users, anyway. But when the deception becomes obvious, there is no point in lying.

Facebook first added ridiculous augmented reality masks to the messenger (users could try on cat ears or funny hats) – as if checking to see if the idea would take hold. In the spring of 2017, the network went further by launching the Facebook Spaces VR platform. In fact, it’s already similar to what the film “Ready Player One” describes. You can create a virtual character like you and live in a virtual world with other such characters. But in order for this to be enjoyed by as many people as possible, you need VR glasses. And this stage has come. A few months ago, a new version of Oculus Go glasses, owned by Facebook since 2014, was released on the market.

So, what do we have? We are communicating less and less outside the Internet. We know how to distort reality. And finally, we can go virtual if we want to. And then where is the difference between fantasy and life?

Everyone already knows how much information can be obtained with the help of vibrations on the phone or smartwatches. The same thing works in AR and VR – touching an object in the virtual world is transmitted by vibration. So far, this is extremely scarce compared to the entire possible tactile spectrum. But this spectrum is going to get wider pretty quickly.

Smells and tastes are also experimented with. And here, it is important to achieve not the revealing of smell or taste but to learn how to transmit a signal that the brain will be read as the aroma of the perfume of your loved one or the taste of coffee in the morning. And this virtuality is already being studied in laboratories.

So, what’s it gonna be? What if very soon, people will date only with digital versions of themselves or with designer robots created according to one’s preferences? It sounds pretty scary. But should we stop developing technologies and give up all the opportunities they offer? Nonsense. It is not the fault of the creators of artificial intelligence, augmented and virtual reality, machine vision, and the Internet as a whole that people love or do not love each other. The relationship with the virtual mate can as complicated and painful as a real one.

Or, on the contrary, there’s a happy ending. Under all these statements, the only option we can follow is to just love each other here and now.

How to Remove Noad Variance TV Adware From Chrome, Firefox And Safari [2021]

Getting to Grips with the Evolving Online World

How to Spy on Your Spouse’s Android without Touching It